- collection: photos of
each vase and bottom

Marius and Hugo van Woerden made pottery in the Netherlands in the period 1964 - 1984.

Their pottery is also known as Vest Keramiek Gouda.

From 1964 to 1973 the brothers van Woerden made pottery with the name
"van Woerden Gouda Aardewerk". 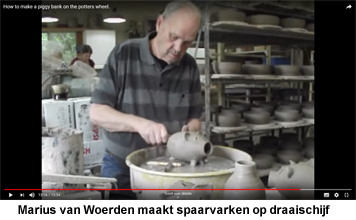 Marius van Woerden lives in Canada and still occasionally makes pottery. You Tube has a video (January 2020) on which he shows how a piggy bank is made on a turntable.

TIP.
Is this your first visit?
Click in the menu left on "collection: photo book with groups". You get an overview of the diversity of models and glazes. 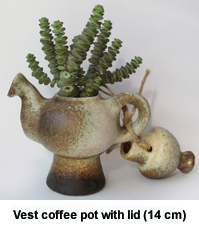 Almost all pictures can be enlarged by clicking on it. An enlarged picture of one vase shows also the bottom. In order to compare pictures with each other, they are opened in a new window. Just as a pop-up.

On this website the name Vest is used, also for pottery from the period "van Woerden". Vest ceramics was made to use with flowers. So coffee pots with a lid, were used for dried flowers arrangements. Most models are therefore called vase on this website. Exceptions are electric lamps, ashtrays and flower pots.

Vest has no numbers beginning with x. Numbers x1 - x100 are not really but made up by me.

to go to the top (menu) or the end of the page.

With a number or model/shape, or decor/glaze or other characteristics you can look up if a vaseis made by Vest. 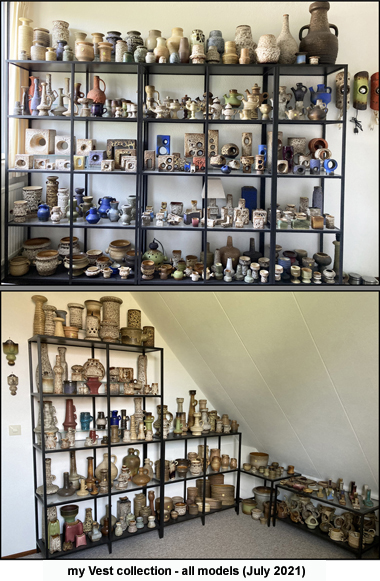 - Collection: a photo of each vase that can be enlarged. The enlarged photo also shows the bottom.
In a photo book vases are grouped together .

- Catalogue van Woerden about 1973 and original photos of Vest about 1983. They are made available by Hugo van Woerden.

- Archive: e-mails with answers given by Marius and Hugo van Woerden to questions about my collection.
In present and past you can read details of their lives.

- Sources and links: links to websites with additional, reliable information about Vest.

- Present and past: information about the periods Steenuil, Canada and nowadays.

For more details; click in the menu on
"photos and information ". 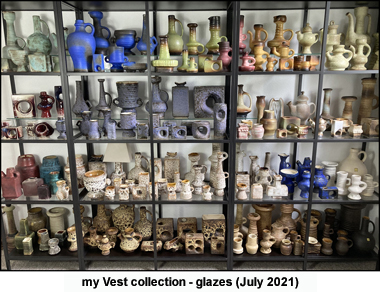 The designer of this website is born at the same period and in the same town as the brothers Marius and Hugo van Woerden. The brothers were born in Rijswijk (ZH) in the 40's. Much information on this website is due to their willingness to cooperate.