- collection: photos of
each vase and bottom

On these page there is brief explanation of each item. Through the menu below you can go directly to the items. 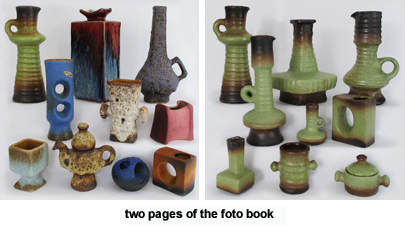 It give you a very good picture of the versatility of the work of Marius and Hugo van Woerden. 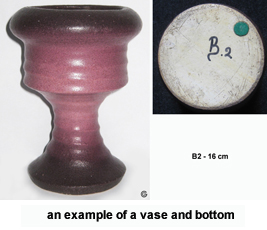 - There are photos from all vases of my collection. Click on a photo to get an enlarged picture of one vase with also the bottom.

- The vases are arranged by number.

- Vest has no numbers beginning with x. Numbers x1 - x100 are not really but made up by me. 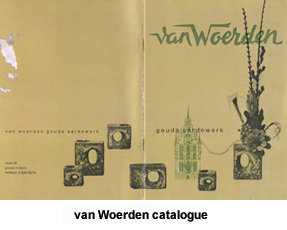 This catalogue is also partly be seen on the website of Marius van Woerden.(vestkeramiek.com).
In it there are numbers of vases and decors such as Rubens, Van Gogh and Rembrandt.

Hugo van Woerden has made me a copy of the original catalogue.

It was probably published between the end of the Van Woerden and the beginning of the Vest period around 1973. The decors names Oliva and Anthraciet were first used in 1975. These decors are not included in this catalogue. 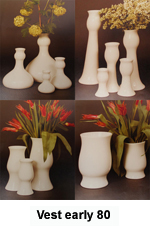 Original photos probably of the last collection of Vest in the early 80. The photos are provided by Hugo van Woerden 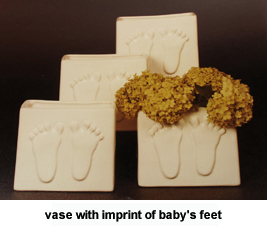 On the right are models and glazes that are very different from what is expected to Vest. In the early 80 buyers wanted especially tight smooth shapes.

The photo on the left is a vase with the imprint of feet of one of the children of Hugo van Woerden. Vest used then a smooth shiny white glaze.

There are few reliable sources that help identify Vest Keramiek. If I had an unknown vase, I ask Marius and Hugo van Woerden for advice.

I gathered their e-mails and replies in an archive. Their answers have been incorporated throughout the site.

Marius van Woerden still lives in Canada, so verbal contact is difficult. Hugo van Woerden, however, resides in the Netherlands and is engaged in the ceramics company of his children.

This page contains information about Hugo periods of the Steenuil, Canada and nowadays. 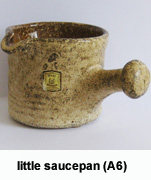 In sources and links are links to websites with additional, reliable information about Vest..

Websites where Vest are sold, are often incorrect. Sellers on "Marktplaats", Etsy and eBay give often wrong information.
Even Catawiki expert (Rob Meershoek) supplied misleading information. A simple vase (A6) is presented as "Dutch Studio Pottery". But there are made thousands of these vases.
There is a list of reliable sellers who have verified their information on my website.